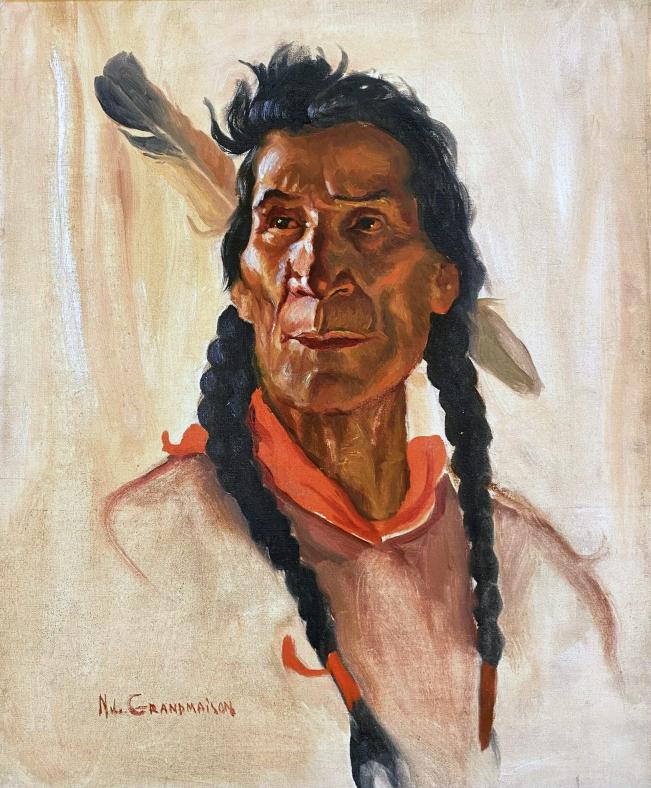 Nicholas Raphael de Grandmaison was born in Russia on February 24, 1892, into a French and Russian family of noble descent. He was educated in a military academy in Moscow where he studied art, music, languages and history. De Grandmaison soon found himself fighting as a member of the Imperial Army when Czarist Russia ordered a mobilization against the German army in 1914. After being captured, de Grandmaison spent 4 years in a prisoner of war camp in Mainz where he used his artistic abilities to produce portraits of prisoners and German officers and it unexpectedly became an opportunity to develop his art.

After the war, and the realization that his family had fallen victim to the war and the continuing revolution in Russia, de Grandmaison obtained entry to England as an artist émigré. He studied at St. John’s Wood School of Art in London and owing to his aristocratic upbringing, relied on his charm and networking, to gain commissions. In
1923, he arrived in Canada and started working in Winnipeg at a printing and engraving firm, while continuing painting portraits of children and businessmen.

Although he was adept at depicting youth and women, he was drawn towards the faces of those who had the experience of challenging lives. Upon encountering the First Nation Indigenous people for the first time in Manitoba, de Grandmaison found the source of inspiration which would last a lifetime. He was determined to record the pride and independence of these people reflected in their facial expressions. This was history of a still emerging Canadian heritage, which he wanted to share with everyone.

With pastels and oils and the desire to visit reservations, find subjects, and educate himself with the First Nation Indigenous way of life, he was delighted to discover a public eager to support him. Not only did these portraits sell well, but they allowed him to expose the native community, through their individuals, to Canadians across the country.
He believed it reflected the beginning of a change taking place in the approach to the First Nation’s culture of the Indigenous people and their place in the Canadian landscape. Alberta became his home and his subjects of the Blackfoot, Sarcee, Peigan, Stoney and Blood tribes his main source of inspiration. He regarded the Plains Indigenous peoples as the aristocrats of North America and through his romantic vision saw in their weathered features the strength he wished to portray. In America he managed to convince “High Eagle the last warrior from the Battle of Little Big Horn, to pose for him as well as many other Elders of the First Nation Indigenous community.

In many cases he did not want to part with his pictures as he thought of them as “my children”. His success with portraits of business and political leaders, children and celebrities became the mainstay of sustainability for his family and continuation of his work.

De Grandmaison preferred pastels to oils, thinking that this medium captured the fine nuances of skin tones and injected drama into the prominent features of his sitters with texture as well as colour. He favoured a type of pastel sandpaper from France which gave him a choice of fine or coarse textures. Pastel was an easier medium to use travelling and setting up in remote areas. With his tin chocolate boxes full of his favourite colours and his portfolios stuffed with paper and finished pieces, he was always ready to work at a moment’s notice.
The artist and his family moved to Banff in 1940. His success was in large part due to a stable home life provided by his wife overseeing the care of their five children while he was travelling the reservations and crossing Canada selling his works. His wife Sonia was a sculptress of note who did many busts and figures of family, friends and people of note. Her biggest achievement was the statue of Sir John A. Macdonald standing in Victoria Park in Regina, Saskatchewan. The creative home ambiance produced two sons Orest (Rick) and Nicholas Jr. who both became painters of landscapes, and three daughters, Tamara, a painter of portraits, Sonia Claire, a broker of art, and Lou Sandra, a support to
the family.

Elected into the Royal Canadian Academy in 1942, de Grandmaison was recognized for his achievements. In 1959, he was inducted as an honorary member of the Peigan Nation and given the name of “Enuksapop” or ‘Little Plume’. A testament of his lifetime mission to depict the First Nations people of western Canada, he was awarded The Order of Canada in 1972. He was also given an Honorary doctorate from the University of Calgary and in 2016 the Museum of Alexander Solzhenitsyn in Moscow honored de Grandmaison and the artistic members of his family. This museum was initiated by Alexander Solzhenitsyn to honor artists and writers who became successful in other countries of the world after having to leave Russia as refugees.
Nicholas de Grandmaison died in Calgary on March 23, 1978 and was buried in the Peigan Reserve where he had been made an Honorary Chief. The Bank of Montreal bought his large collection of First Nation Indigenous portraits in 1979 and subsequently donated it to the University of Lethbridge in Alberta. It is a home where these individuals of Canada’s Indigenous heritage is are celebrated and shared as a permanent part of Canadian Art history. 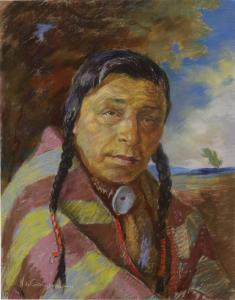 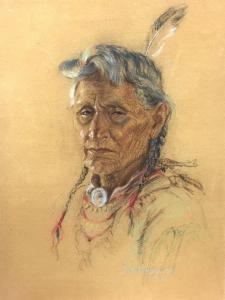 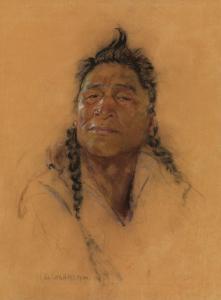