Fortin, Marc-Aurèle, painter, engraver (b at Ste-Rose, Qué 14 Mar 1888; d at Macamic, Qué 2 Mar 1970). Fortin's work, devoted entirely to landscape, demonstrates his love for a rich and bountiful nature. His brush transforms heavy clouds, thick foliage and rising hills into large, free forms, vibrating with colour. Despite studying in the rather conservative setting of the École du Plateau with Ludger Larose, the Monument national with Edmond DYONNET (1904-08), and at the Chicago Art Institute (1908-14), he developed a modern view of rural subjects. The Laurentian lowlands, the Montréal suburbs, the Charlevoix region and the Gaspé Peninsula in turn attracted his attention. Only relatively late in life did this solitary painter receive limited recognition: the Jessie Dow Award (Art Association of Montreal, 1938), associate of the Royal Canadian Academy of Arts (1942) and a retrospective exhibition at the Musée du Québec (1944). Fortin remained unfathomable for most of his contemporaries. His prolific production, experimentation with various media and personal vision of nature have established him as a pioneer of modern art in Québec. 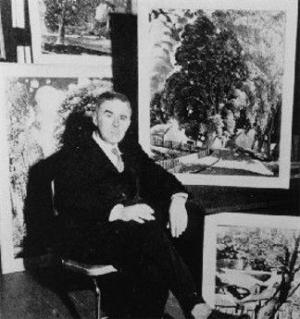