Geoff Farnsworth was born in Kimberley, B.C. in 1968.  He began his art training in Vancouver at Emily Carr, The Federation of Canadian Artists, and Capilano University, before moving to New York City to attend the Art Students League in Manhattan.  There, he trained from 1997 to 2002 by working full-time from the human model before experimenting in new directions under abstract painters William Scharf and Frank O’Cain. A post 9/11 environment with tightening visa restrictions finally prompted him to follow his longtime urge to move to Toronto to paint in the same city as his sister, also an artist.  Geoff currently lives and paints in Niagara Falls.

His paintings explore a relationship between figurative and abstraction in order to meld unconscious probing and stylistic innovation with a meditative figural base. Working with people and objects from his personal world, as well as from classical and contemporary culture, he focuses on creating a balance between plan and accident, known and unknown, restraint and exuberance.  His figures look out as much into mindscape as landscape. His paintings have been shown in New York, Washington DC, Minneapolis, Toronto, Vancouver, Calgary, Winnipeg, Thunder Bay, and Stockholm, Sweden. 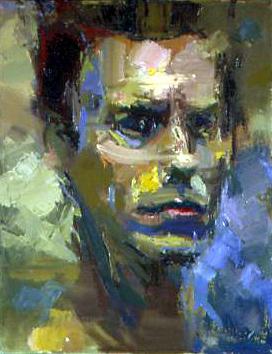